Each morning, one of us drags ourselves out of bed sometime between 6 (bad day) & 730 (good day) to tend to the small boy. Some days, the earlier ones mostly, I’ll confess I make myself a cup of tea & try to make him watch Bob the Builder. All I need is a glamorous makeover & my parenting would be just like Betty from Mad Men: “Bobby, Sally, go watch tv!” Well, that and swap the tea for wine…

So breakfast isn’t our most enthusiastic meal. As adults we tend to eat the same breakfast habitually. Me, its cereal and tea first and toast and a banana maybe an hour later (or in work when those days return). But you’re supposed to get baby used to a variety of foods, and breakfast is where we’ve found this hard, mostly due to bleary-eyed parents & an unenthusiastic eater. Mark piped up that maybe Dom’s like him and doesn’t eat early. I’m damned if I’m raising a human that doesn’t eat breakfast. Hello! Most important meal of day!

There’s a theory that you have to offer a baby food 10-15 times before they really decide if they like/dislike it. There’s a study, its out there. This is because babies like familiar foods so get them used to it & they’ll like it, or they really won’t? I dunno, its pretty disheartening the first 9 times a child refuses something. Anyway,
I’ve made porridge pancakes – thick porridge cooked with blueberries, left to set, cut into strips. We’ve given him barely wet mini oatibix. Chunks of banana. Toast. Bit of nectarine. Rice cake. Any of the usual things he might eat. He just likes to do swiping on to the floor.

Yesterday I noticed Dom stare at my lunch over his for the first time. He had cheese & cucumber, which he was ignoring. I had a sesame bagel with cheese, leaves, cucumber & tomato. I handed him a chunk of cucumber from mine, he had a go of it, then whimpered in my direction again. I gave him some tomato, which he sucked and mushed & licked, delighted with himself. So this morning, we shared a bowl of oatibix. It worked. He squished the little nuggets in his fist & gummed away on them. Finally! Breakfast! And as you can see, quite happy about it!

BLW has been going from strength to strength this past week, especially at home. He’s not as into it out and about, but thats because he’s so nosy he’s too busy too feed full stop. Sure he has to look at EVERYTHING thats happening. I made some sugar free banana bread. Except i made it in muffin form so i could bring them with me. Tried to feed him one while I was in a coffee shop earlier and by the end it just looked like i was an incredibly messy eater & had spilt my muffin everywhere. Also I was self concious and wanted to shout, “Its sugar free! I made it myself! I’m not giving the baby cake honest!”

So this evening for dinner, we had the first every fully proper family dinner – a Antonio Carluccio recipe, Pasta with courgette sauce & spinach balls. We all had the exact same thing, with some slight adjustments to the recipe. I didn’t season the mix with salt. I used wholemeal breadcrumbs. And yes, I did include one green chili. I used fusili pasta as its easier for Dom to pick up. I pureed the sauce, not for any baby-friendly reason, but because it looked to me like a pan of grated courgette in olive oil and blitzed it was much creamier.

Dom had 2 of the spinach balls – actual ingestion rate of maybe 25%. He grabbed the first one and shoved it straight in. And his sometimes hard to please father even proclaimed it “proper veggie comfort food”. (vegetarian cooking is something we have many many many slightly heated discussions about). So, winner all round!

This week I also found this blog, My Daddy Cooks, about a guy who’s been mostly in charge of his son’s BLW. Hopefully its going to be an inspiration in this house 🙂
– jill

i don’t see whats wrong with spoon feeding at all. sure i can do it myself now. the spoon makes a great noise as well when i bash it about. i have to do that because mama doesn’t take it off me to fill it up fast enough. Natural yogurt is very tasty i musta had about 6 spoons of it, but you can see a lot went on my face. Also I have anabel karmels cheese & tomato & basil mush on me, I sucked it off pitta & then put some on my forehead too because why not?

here’s a link to a quick video of me feeding myself too. sure i barely need that mama one at all anymore.

I kept meaning to cook them for him but we’ve not had sweet potatoes for ages. Then last week I remembered, and some lunchtime wedges went down a treat with both of us. I had salt on mine, and a sneaky sprite zero under the table while I was at it. I do think i’m going to have to improve some of my eating habits in front of Dom, for his sake and mine!

Anyway, I think they represented the first proper consumption of food. He’s gone very good at picking the food up & getting it straight to his mouth, and the skin on the wedges was naturally grippy, despite the olive oil. Also, the flesh goes soft enough to fall off at even his mildest gumming on it. He did squish a couple at first that made them impossible to hold onto after that, but his ability to recognise how gently or otherwise he needs to hold a piece of food is improving no end too.

Swings & roundabouts – from no food to this in a week – i’m only delirah!
-jill

I wasn’t having any of it there for a bit. Mama kept trying things, things she knew I ate before, but I just didn’t feel like it. I’ve been having my milk as usual from mama but I showed daddy a good bit of my midnight feast bottle last night straight away after he gave it to me.

I tried telling her she’s not supposed to worry about me having a few days off my fud – that’s one of the things about baby led weaning – but I cant say any words yet. But she tried me with one of them purees. It’s lovely, I had some myself there last week, but I didn’t want any solids, and there’s no point trying to shovel it into me either, I know how to fasten up my mouth so nuttin’ gets in.

She brought me to the doctor this morning. The nice lady had a cold thing all over my front and back, and a light in my ears, and a stick in my mouth that made me gag like when I try and eat Cody the cat’s whole arm*

The doctor said I was fine except for the konjunk…congeunt…pink eye. So I immediately cheered up today then and decided I wasn’t even going to wait til I was in my special chair for eating. I had nice brown bread with almond butter and I had a good chew on it too so I did. I think it was mama’s snack but sure she can get herself another one.

Then when I napped mama made hummous, which I had with some carrot & pitta at dinnertime. I’ll have more tomorrow I reckon, maybe on a rice cake.
-dom 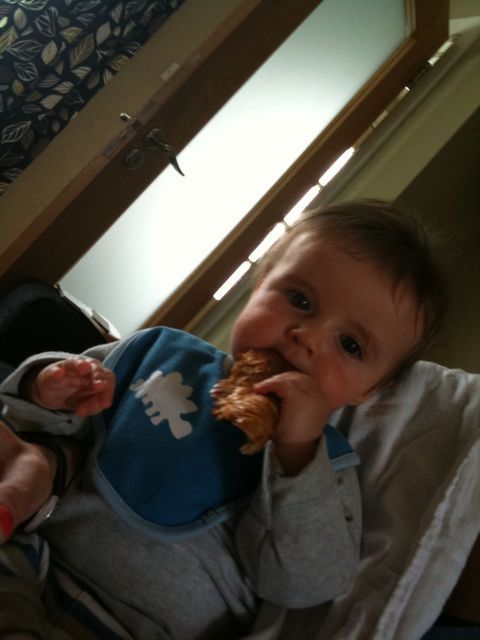 *Cody is cat soft toy not one of the real ones. But I’m sure he’ll try eat their arms by next year.

I mean, fair enough.
Not content with knitting up a storm (ok I made 2 things) tonight, in a completely unconnected activity, I spun my own wool! I'm not even messing. I'm doing a course on Weaving In The Liberties focusing around the Viking era. So, this is authentic to the time in some ways in that no spinning wheels allowed because they weren't invented - but not in others - spinsters weren't married! #spinster #spindlespinning #craftymom
I finished my first knitting project! (First since about 1990 anyway) Thanks to @knitbitsbyniamh who's been coming in to coach a gang of us in work. I won't lie this was supposed to fit me but I read the pattern a little bit wrong, several times. Good thing there's an assortment of head sizes in my house 😆 . . #beginnerknitter #woollyhat #7yearsold #craftymom #stitchandbitch
Introducing Eleven to her namesake. And possibly cuddling her for reassurance also. Don't be fooled by his slightly worried face, he's absolutely loving it. #eleventhecat #strangerthings #thisis10 #motherhood
Don't feed the animals.
Get yourself a Mammó that can teach you Phil the Fluter. 🎶 ( And other assorted mad old songs and dances. These are the skills I do not possess. )
My Tweets