Has your child ever asked you loudly in public why that man has such a big belly or why that lady has a beard? Yes? Well then you will understand how I felt when my child brought this home from school the other day. 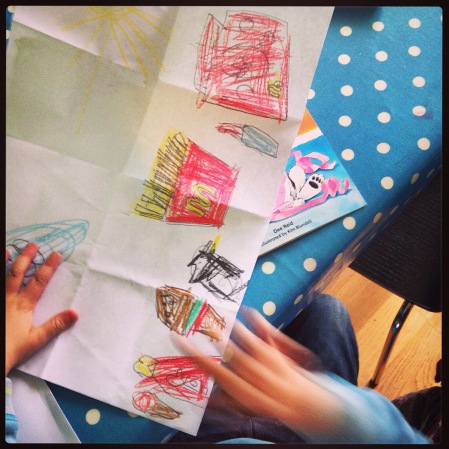 END_OF_DOCUMENT_TOKEN_TO_BE_REPLACED

See over there on the left (or down the bottom on yer mobile)? Yeah that, the Irish Parenting Blog Awards! I’ve gotten a couple of nominations, and excitement is building in the IPB community. I don’t get out much and now I’ve a glitzy awards ceremony to look forward to. Eep!

One of the awards sponsors is the fabulous Glenisk – who I’m on record as loving already in case you think I’m sucking up. I’m gonna represent on behalf of vegetarians and show how we use their products outside Go-Yo’s in the lunchbox. We use them a lot.  So, me and the boys had a little think about dinner while we indulged in a breakfast smoothie…

We decided on curry. This particular one is a real treat meal, but still lacks the guilt of a takeaway. I dunno about you but I love curry. I have eight million herbs and spices but sometimes I want some shortcuts. I don’t like using jars so the compromise option for me is to buy a spice mix from Green Saffron (another great Irish company). As usual, the packet recipe is for a meaty curry, so I adapted it to suit us.

Now, in case you think “ah here, I’m never going to get through all this lark the kids will be all over me looking for their dinner” I like to chop up extra veggies and just leave them on the side as if they’re an ingredient, and then, just watch them disappear. They sneak in and grab them, thinking they’re hilarious. Joke’s on you kiddo, you just ate raw veggies.

Serve up your curry on a bed of brown basmati rice with a sprinkling of coriander and the crushed up toasted cashews scattered on top for a protein boost.

I made an extra serving of yogurt with some dried mint and more lemon zest mixed in. My kids are generally ok with a mild curry, but I often add yogurt to their dinner just to cool the temperature when they can’t wait to get stuck in.

During dinner prep we even managed to make a bit of dessert. Lime (veggie) jelly with raspberries and blueberries. I stuck it in the freezer so it would be ready after dinner. The colour of the fruit ran so it wasn’t as pretty after. Never fear, it was eaten, but we had run out of yogurt to serve with it. 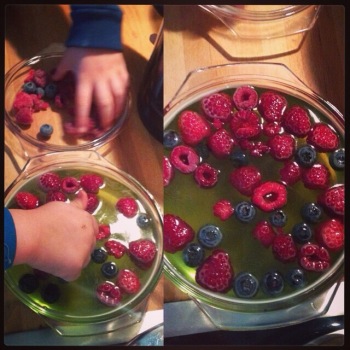 I’m a big fan of The Happy Pear, the grocers and cafe run by a pair of handsome man-twins seen being optimistic and cheery and wearing unseasonal shorts all over the media late last year. That was shortly before my birthday and the reason they were so ubiquitous was that they released a book, so I sat on my hands to avoid purchasing it and waited. With not a hint dropped my BFF turned up with the goods and I don’t quite recall but I probably snatched it from her in a my preciousssss style.

The book hasn’t let me down. Though their food is my style – vegetarian, hearty, unpretentious – I will preface this by saying I’m not entirely on board with all their methods. I’ve pretty much halved or cut out the salt in the recipes I’ve made from it, and have been more liberal with my oil use: olive, rapeseed, sesame and coconut are my fats of choice. The guys are not fans of oil use at all as they explain in the book. However I heartily agree with the main thrust of their philosophy, which is:

Sure you can’t argue with that. END_OF_DOCUMENT_TOKEN_TO_BE_REPLACED

Twelve full seconds of silence. Watch them.  See the contented chewing and nodding and not hitting each other.  This could be your house too.  Read on! END_OF_DOCUMENT_TOKEN_TO_BE_REPLACED

You’d think there wouldn’t be so many surprises the second time round. The learning curve with weaning of any kind is steep, as much for parents as for junior.

I can’t remember how Dom took to pre-loaded spoons.  But I know that he did master them, by a couple of weeks later than this stage with Theo.  In fact there’s a very cute video here. I’ve racked my brains and can’t think how it started, so I just went ahead and handed Theo a spoon  with an assortment of items (not at the same time) – porridge, bananacado, thick soup, and more often than not he flips the spoon and sticks the handle in his mouth.  So this evening, with a lack of anything else for dinner to give him, and parent no.2 not home I decided he could  have some of my massamam curry, with tofu, butternut squash and of course potato.  I use the Thai Gold brand of paste, which I’ve blogged about before here.

The pieces were in small cubes, and we’re not in pincer grip territory yet, so I thought I’d try the pre loaded spoon again. I gave it a wee mash up, to a good soft but lumpy texture, and added some natural yogurt to cool down the spice. FLIP off went the curry across the table and the spoon went in upside down.  I had a little lightbulb moment, he doesn’t know what he’s missing! I put some on the spoon, coaxed open that little mouth and SPOON FED him.  I did this 3 times with small amounts, then he shrieked when I took the spoon away.  You want it that bad baby?  Help yourself!  And he did, roaring indignantly each time I took the empty spoon back from him.

The spoon: it contains yummy stuff.  He just didn’t realise it.

Last night Mark made the speediest dinner ever using this basic recipe.  He’d been inspired while watching Gino D’Acampo in a hospital waiting room and I’ve found a link to the broadcast since (you can’t watch outside the UK but the recipe is there).  I was in another room with needles stuck in my boob at the time so obviously I’d have preferred to have been watching cheesy lunchtime tv.  And safe to say, I think it was fair enough that he was on dinner duty after that little ordeal.

If you look at those 2 recipes linked above, they’re basically the same and I reckon you could do this with grated carrot or grated courgette – any vegetable that softens up nicely and has a bit of sweetness.  Maybe add some chopped spring onion, and some more herbs or spices.

Him & I ate these with some leftover curry, but Dominic just ate about 4 of these tasty sweetcorn fritters on their own.  They’re very moreish.  They’d be nice with a side salad and with the natural yogurt, garam masala & mint dip that I’ve written about before.

I reckon these are the perfect baby led weaning food.  Easy to hold onto, they can be eaten hot or cold and can be cut into strips either.  They’d be a great party food, and go nicely with a bottle of beer!  So, definitely a crowd pleaser!

I just got a text from my nearly-sister-in-law (3 weeks to go!) to tell me that me & Dominic’s blog got a mention in today’s Irish Independent magazine.   Having stayed up til the unholy hour of 1230am – VdeP table quiz, we didn’t win –  then risen for teething & rugby by 6am, I’ve not been very tuned in today at all.  So this bit of news has dragged me away from a saturday night wine & telly slump, as Dominic is fast asleep as any 21 month old should be & can’t be disturbed to blog.  Welcome any and all new readers!

I feel slightly fradulent here – Dom’s going through an awfully fussy time this week – 2 lower incisors are to blame, but in general, he is getting harder to please.   He did chow down on sweet potato wedges for lunch, but this evening he threw lovely courgette slices & sweet red pepper chunks (previous  favourites) across the table and proceeded to spoon out plain white rice for himself.  He may have had some creamy almond butter sauce but it definitely wasn’t intentional.

(One point to note, is that Dominic is not actually vegetarian, neither is my husband.  I never cook meat/fish, Mark does about once a week.  I fully intend to buy That’s Why We Don’t Eat Animals for Dom though and guide him towards his mamma’s way of life…)

*this represents the views of the author.

They ate mackerel fillets there last friday night, the boy and his dad.  I believe mackerel was grilled, some baby new potatoes were steamed and off they went.  I’m also told that fillets don’t have bones in them, that the 3 fillets cost under €3 in Superquinn, and that the smaller boy manages the potatoes easily when quartered.

I really thought I could convince Dominic’s dad to write the meaty & fishy posts for this blog, but that never came to pass.  Dom isn’t vegetarian, not yet, so I don’t just want to show a one-sided view of what he eats.  But save telling you the facts, I can’t share much else.  I don’t cook it and I won’t, but I do want to help others that are starting off BLW with their kids, or just trying to come up with different ideas for feeding their own families.  So I’ll keep telling you what Dominic eats.  Just don’t expect me to be super happy about it…

As I’ve mentioned a time or seven, Dominic isn’t so into his spicy food.  But luckily, cutting back on heat in cooking doesn’t mean cutting back on flavour, or lovely Indian cooking and this weeks top fud reinforces that. 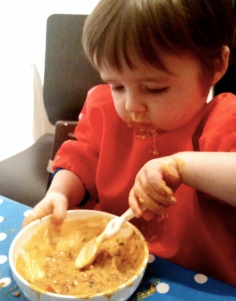 My absolute go-to cook book is this one. Much as I love my BLW cookbook, there’s some recipes that I just prefer ‘my’ versions of – dhal is one of those.  This book is bruised and battered and so it should be, this tome has travelled.  It was bequeathed to me by Brian & Nataly in New Hampshire, who owned 2 copies because they had different covers and hadn’t realised.  In 2005 me & Mark and the rest of (one of) the band(s) he plays with were staying with them for a couple of nights while they were on tour.  (I mention it because of how it highlights the contrast of pre-baby days with now!).  It came back to Toronto & then formed a large chunk of my baggage allowance back to Ireland when we moved home.

Luckily, I haven’t had to transcribe this recipe, I’ve found it elsewhere so cheers to that lady!  I don’t do peeling & deseeding tomatoes where possible so I’ve just used a tin of tomatoes instead.  I also had no limes to hand so used lemons.  And I used the handy coriander-in-a-tube thingy too.  This is a store cupboard type dish for me, and made it after getting me & Dom in the door from Mammó’s house with a car full of stuff and no time to think or unpack before dinner was needed.  See below the cut for the recipe.